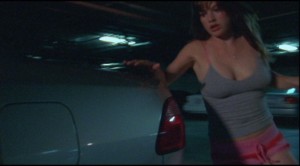 Film trailers are an art unto themselves.  I love watching a good film trailer and the best trailers are able to encapsulate the tone and feel of a film into a 3 minute (or under) experience.  I’ve noticed that there are usually 2 types of film trailers – the “teaser” trailer, which usually gives you a quick glimpse into the movie – the stars, the genre, and some cool shots that kickstart the imagination of the audience.  A teaser trailer usually very stylized – sometimes you don’t even have the characters talking, just let the music and images speak for themselves!  Then there is the “trailer”, which outlines a bit more of the narrative of the film, and maybe follows the journey of the main character.

With SOUL KILLER, I actually had the idea of the “teaser” trailer while I was filming the movie.  I had pretty much cut it in my head, and I knew I wanted to make it mysterious and exciting.  The whole question of the teaser trailer posed was – who among our talented cast was the identity of the Soul Killer?

The next trailer of SOUL KILLER was made after the movie had been finished.  Because of this, it was a bit more challenging to create.  I couldn’t film any more shots – so I had to build the trailer from what I had.  It showcases a different side of the story, which I think is key in making a second trailer.  If it’s just a rehash of the first trailer with a couple different shots then it’s not as interesting.  In this case, the “trailer” follows the journey of our lead character, Natalie (played by Kelly Chambers).

As always the goal of a trailer is to try to give the audience an intriguing, exciting experience – but still hold back plenty for the film itself.  I hope you’ve checked out our trailers, and I hope they excite you for the film to follow!