Production Design is one of the key facets to your film’s identity.

As great as your cast looks, you don’t want your film to be a series of close-ups. Showing off a beautiful set can really help your audience discover what your film is about and add depth and visual interest to the frame. Of course, as an indie filmmaker, you don’t have the budget to build huge, Hollywood-type sets –– so you’ve got to find them out there ready made.

On SOUL KILLER, one of the best sets turned out to be the magic shop because it was so colorful and richly decorated. The filmmakers shot in an existing store. The owners were incredibly nice, and, as you can see from the still below, the place was filled with interesting objects and bright colors: a crystal ball, colorful robes, and many New Age knick-knacks and trinkets. It’s busy and crowded.  The place felt very warm and welcoming, which was perfect for the character of the Shopkeeper (played by Barbara Goodson) who befriends Natalie. 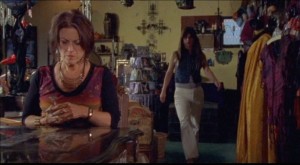 Another great set was the morgue, which was the only artificial “set” in the movie. It really added production value to the film.

Every other location was real –– mostly apartments and houses of the cast and crew.   “We were the same age as the main characters in the film, and I wanted the characters to live like we did –– on a budget,” Writer/Director Bob Canode said. “We couldn’t afford homes that looked like a Pottery Barn catalog, so neither could they.  This meant there were some white walls in the film. It’s a big “no-no” in independent filmmaking to have white walls because they can look flat and drab, but, to me, it was truthful to how many people of our age and budget range live in Hollywood, so we kept them in there, breaking them up by incorporating a couple of paintings and pictures.”

For the Hawaiian party scene –– they used a huge backyard, which was very tough to decorate because the space was so big. The team bought a lot of props from a local party store, but it couldn’t begin to cover the entire space. It was very, very tough to fill up all that empty space. In the end, the actors and extras were dressed in Hawaiian garb (shirts or sarongs) and then strategically placed around the frame to fill the frame up. Occasionally some extras were placed close to camera so they could hide an empty yard. 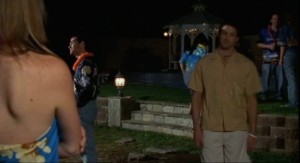 As opposed to many independent films which take place in one or two locations, SOUL KILLER actually had many, many locations, giving the viewer a flavor and impression of present-day Los Angeles.   The production shot all around the LA area:  Hollywood, Winnetka, Tujunga, North Hollywood, and Sun Valley.  They even made a special trip up to the Mojave desert, to shoot one scene on the El Mirage dry lake bed.