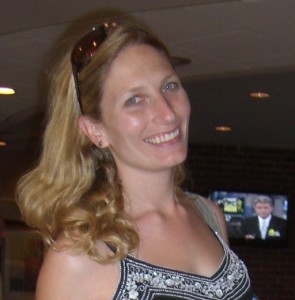 You play the character of Hope.  How was it playing her and who do you think she is?

It was fun to play Hope.  Hope comes from a small town where everyone knows one another & honesty is rule #1.   So, when she moved to Los Angeles to become an actress she quickly found through trial and error that not everyone is truthful or nice.   Because of that she sometimes has a hard time making friends or taking risks in life and she also wants to protect her true friends – like her roommate – from people who may be in it for themselves.  She still believes there is good in the world, but you have to be intelligent about the choices you make in life to stay on the right side of the line.

How did you prepare for the role?

Breaking down the script for me is always primary.  Each line gives a detail or insight into the way this person thinks and what they have lived through in the past to get where they are today.  From the script you can devise a back-story so that you really know who she is and what her goals are in life.  For Hope the hardest part to reconcile was the fact that she is a highly religious person who wants to make it as an actress in Los Angeles – two things that are not easily reconciled in the real world.

What was your favorite scene to play?

I really liked the scene where the Soul Killer is in the apartment.  It was fun to be in a horror movie scene because it’s quite different from the other roles I’ve played. …. I think that I’ve only done one other scary movie and it was a short…

How did you pick out Hope’s wardrobe?  I noticed you wear a lot of white.

I wanted really innocent gentle clothes – Something that brought out her soft side.  Especially since she is the contrast to Natalie who’s attire is darker/bolder.  I think that Hope would be comfortable lounging in a long skirt on the couch watching a movie.

Any cool or fun stories from the set?

We had so much fun making this movie; it’s hard to think of any specific parts that were better than the others.  I really enjoyed learning martial arts during the training for the final scenes (even though I was not the actress being filmed for these, it was so fun to practice along & watch the training).  I remember lying under the bed holding the dog’s leash so that he wouldn’t leave during one of Natalie’s scenes in her bedroom, I think it’s hilarious to watch that scene now and say, “There I am!  …under the bed…”

What is your acting style?

When I follow a strict style I really like Uta Hagen’s techniques for breaking down the script/realizing back story / relating to the character.  However, when I’m acting and filming I find that I always go back to Stanislavsky’s method acting – that was my first formal training for acting so I find that I shift back to that without really thinking about it.

You also did make-up on the set.  Can you tell me about that?

I have done make-up for fun forever, so I just naturally fell into doing that when I was in a play or acting for film/TV.  I love making up new characters using make-up, so my favorite is of course doing the death/blood/bruises make-up.   I’m really proud of how the make-up turned out when Natalie burns her hand in the pool – I have done burn make-up for stage before, but it’s completely different for film!

You did a great make-up job on one actor in the morgue.  How did you make that actor look so dead and lifeless?

Are you scared of the Soul Killer?

I think anyone who is truly “pure of heart” need not fear the Soul Killer, Hope is a beacon of light in the dark city of Los Angeles.

….I, on the other hand, should probably be afraid of the Soul Killer  *smiley*

What are your other favorite horror films?

I really appreciate the classics like HALLOWEEN, NIGHTMARE ON ELM STREET, etc.  I also like the more obscure ones like the LADY IN WHITE and HIGH TENSION (HAUTE TENSION) because they have a un-nerving suspense to them.  One of my favorites, which is more of a fairy tale/real world horror story is PAN’S LABYRINTH (EL LABERINTO DEL FAUNO).  I could go on all day about different obscure horror movies that I like – wow!  THE EYE (original 2002 version) – SO SCARY!!!